What in the World is a Jellyfish?

A deep dive into one of the Aquarium’s most mysterious creatures.

Planet Jellies is one of our most popular exhibits here, at Ripley’s Aquarium of Canada. While the jellies are certainly beautiful as they drift around in the coloured lights, it isn’t necessarily obvious what jellyfish actually are. 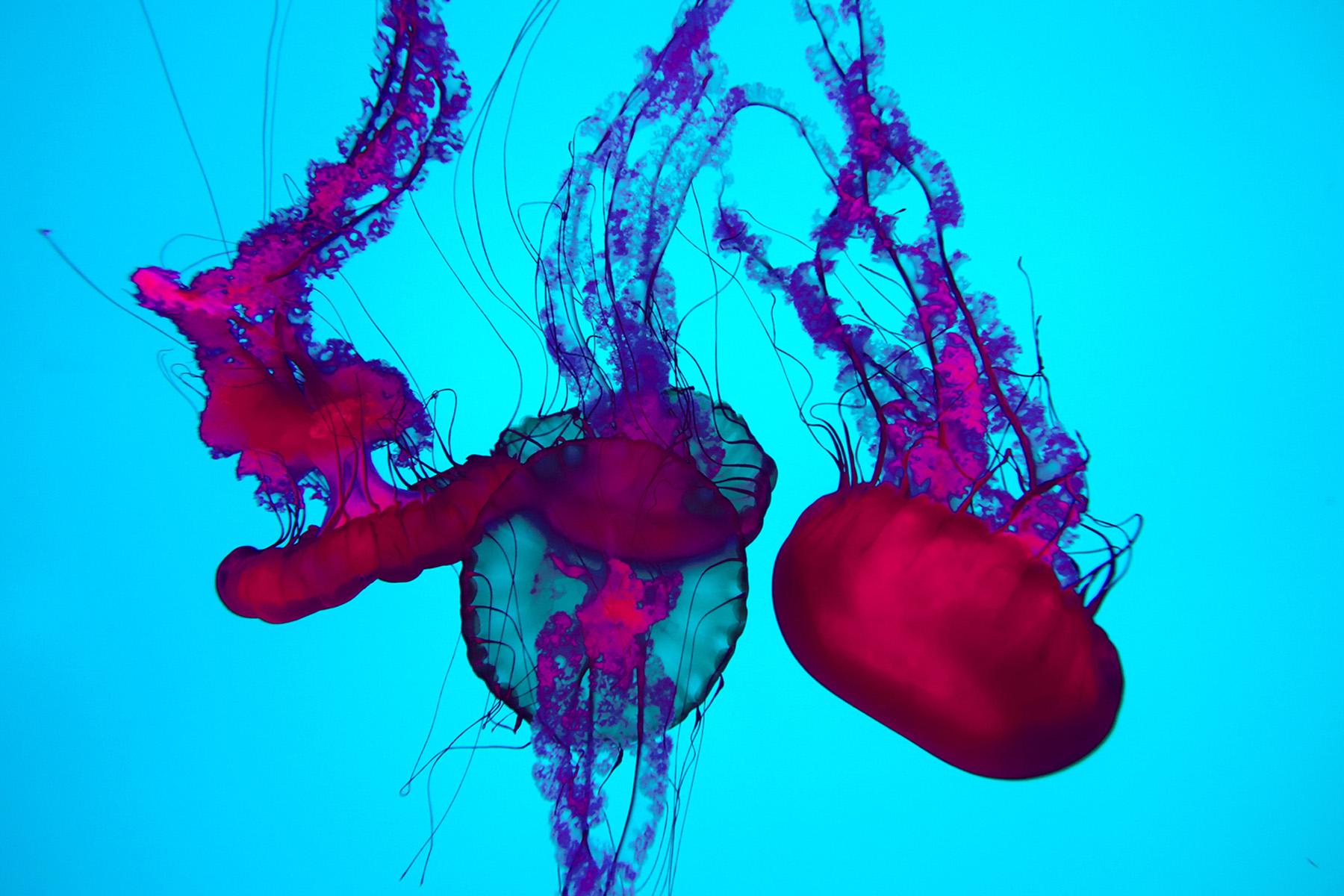 What is a jellyfish?

When we talk about jellyfish, what we are actually talking about is the medusa stage in the life cycle of a variety of animals. True jellyfish, or Scyphozoa, spend most of their life in the medusa stage and are probably what you picture when you think of jellyfish: a jelly filled bell with lots of long tentacles hanging down. Box jellyfish, or cubozoa, have a more complex nervous system than other jellies and many are notable for their potent venom. Hydrozoa also have a medusa stage that resembles a typical jellyfish, but usually spend most of their life on the ocean floor as a polyp. All of these animals belong to the Cnidaria phylum which also includes anemones and coral. What brings all Cnidarians together is their venomous stinging cells (more on those later!).

Life cycle of a jelly?

We can think about the medusa stage as being the adult portion of a jelly’s life cycle. Medusa reproduce by spawning, creating a larva called planula. These little planula drift through the ocean until reaching the ocean floor. That’s when things get interesting! The planula will attach to the ocean floor and develop into a polyp.

Polyps look kind of like jellies, but tiny and upside down. Their mouths and tentacles are on the top, so they can eat any food that drifts down or floats by. Here’s the awesome part—polyps can grow a small bud, genetically identical to itself (like clones!). Buds eventually separate to form an entirely separate organism. Some species can reproduce like this until there is a whole new colony of polyps!

Eventually, when conditions are right, it’s time to move on. The polyp starts to grow taller and thinner, and begins to divide into sections. These sections separate from the main body to become ephyra—tiny jellyfish! These ephyra will leave the ocean floor behind and eventually grow into medusa starting the whole cycle over again! 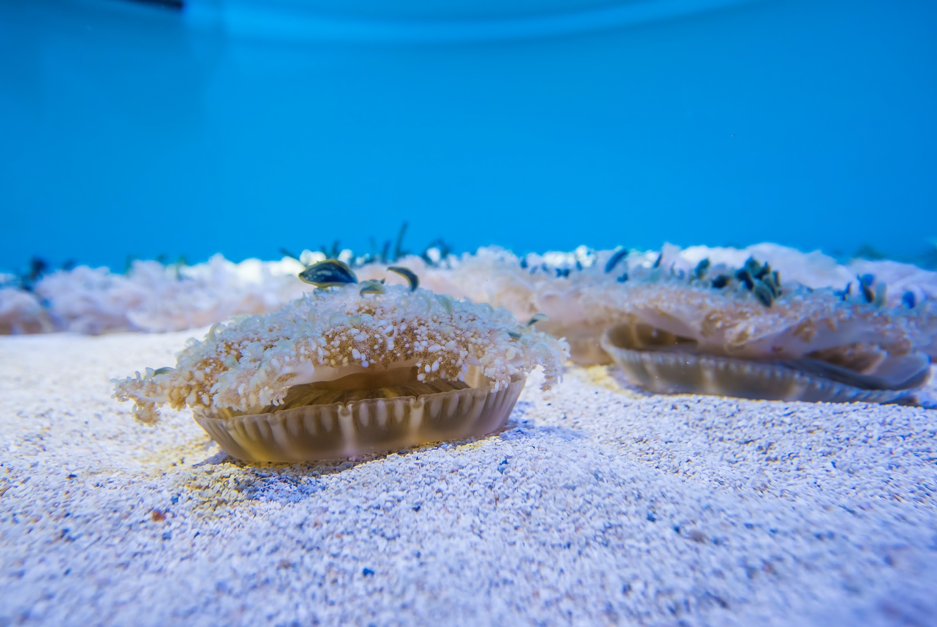 Although we usually think of life cycles as being a one-way journey, there are some jellies that have been seen moving through their life cycles in incredible ways! Some species of Moon Jelly polyps have been observed growing from tissue fragments from healthy adult medusa, skipping over steps of the life cycle. Even more famously there is a species of Hydrozoan, Turritopsis dohrnii, which is known as the immortal jellyfish. When times are tight, medusas of this species have been observed reverting into polyps. They actually move ‘backwards’ through their lifecycle! 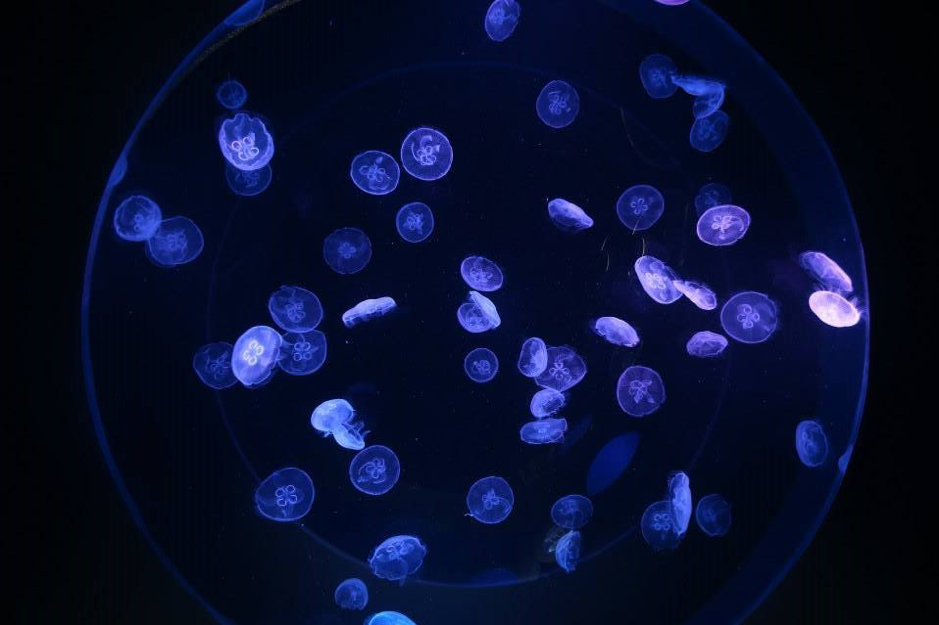 So now we know what a jelly’s life is like. But how do they actually live?

First of all, jellyfish are not picky. They are found in oceans all over the world: at the surface, deep beneath the sea, in warm water, in cold water, some species of hydrozoa even live in freshwater!

Jellyfish are plankton—they’re drifters. Usually we think of plankton as being tiny, and many of them are, but plankton just means living things in the water that can’t fight a current, which includes floating jellies. That drifting is an important consideration when designing their habitats! Getting stuck on a wall or in a corner could be fatal so the exhibits have to be constructed so that there is a constant gentle flow to keep the jellies in motion and away from the outside of the tank.

Despite their lazy sounding life, most jellies are carnivores. They mostly eat other plankton (including jellies!), but sometimes even fish and crustaceans. Here at Ripley’s, we feed them fish eggs and frozen krill, usually blended into a smoothie. We also feed them brine shrimp larvae that we grow on site! That’s right, we have our own live food culture that is maintained behind the scenes!

To catch their prey, jellies use their stinging cells called nematocysts. I told you there’d be more on stinging! Jellies have thousands of nematocysts along their tentacles and some, like the true jellies, have more within their bell to help them keep larger prey. When something touches the tentacles the jellyfish stings! The nematocysts shoot barbs that release venom, which stuns or kills the prey. To humans a sting can range from mildly irritating to lethal depending on species delivering the sting. Once the prey is incapacitated the jelly will pull the prey up into their bell to be digested. Jellies actually pull their food in and then expel waste out of the same hole (their mouth is their butt)!

Jellyfish aren’t only eaten by other jellyfish. They are also popular menu items for certain species of fish, crustaceans, and sea turtles. Unfortunately for those animals, especially the sea turtles, a floating plastic bag looks a lot like a floating jellyfish—drifting and transparent. The Great Pacific Garbage Patch is estimated to contain more than 80 000 tonnes of plastic, and that is just one of the five giant garbage patches in our oceans. That means there’s lots of plastic to go around, which is exactly what we are seeing with sea turtles. Research has shown that more than half of all sea turtles have eaten plastic. 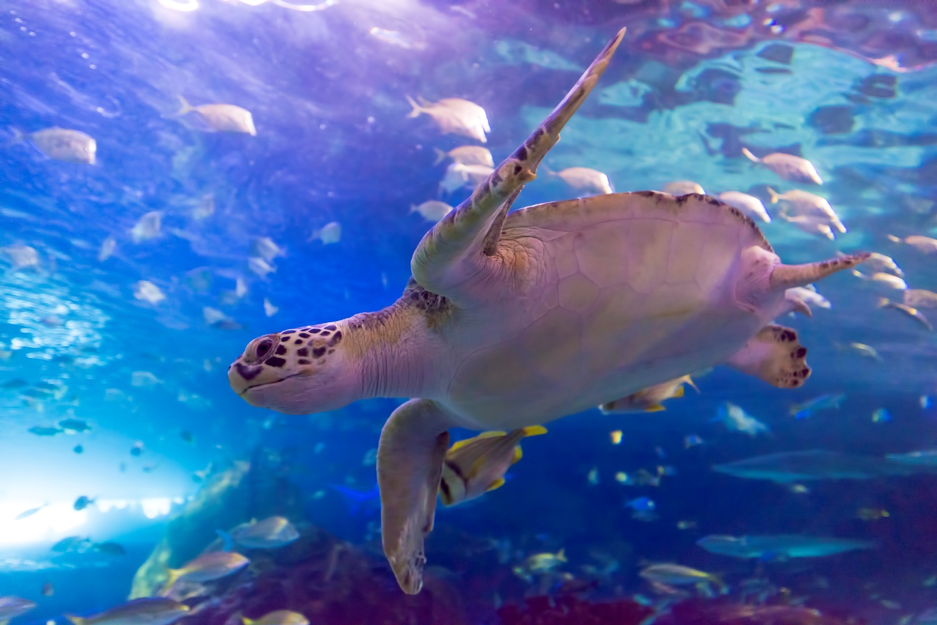 What Can I Do?

Even though ocean pollution sometimes seems like a big and far away problem, we can still have an impact! Here, in Southern Ontario, most people live near some sort of body of water whether it’s the Great Lakes or smaller creeks and rivers. Our garbage can end up travelling out to the ocean on boats, or by floating down rivers. Stopping litter near your home can help protect jellyfish and the ecosystems they are part of, so I’ve come up with a few ways that you can help! You can aim to reduce the amount of waste you produce and make sure that the things you do throw away end up in the right place like compost and recycling bins. You can also organize with your community to clean up your local shoreline or waterway. Many hands make light work, and a group of people working together to safely pick up litter can have a big impact!

If you have any other ideas for protecting our waterways, or fun jellyfish facts you’d like to share, please sound off in the comments below!

Duncan is an Educator at Ripley’s Aquarium of Canada. He studied Earth Science and Education at the University of Western Ontario. He likes teaching people about the natural world and hanging out with fish. His favourite thing about working at the Aquarium is the opportunity to talk to new people every day.