While you were away, Ripley’s Aquarium of Canada opened the “Nar-wall”—a new exhibit all about narwhals, the unicorns of the ocean. In this Deep Sea Diary, we’ll learn about these elusive animals and give you a sneak peek at our new exhibit.

Narwhals are toothed whales in the Monodontidae family, the same family as beluga whales. Preferring cold waters, they can be found in the Arctic ocean, off the coast of Nunavut and Greenland. Like many other marine mammals, social groups are very important to narwhals, as they generally travel in pods of up to 20 individuals. 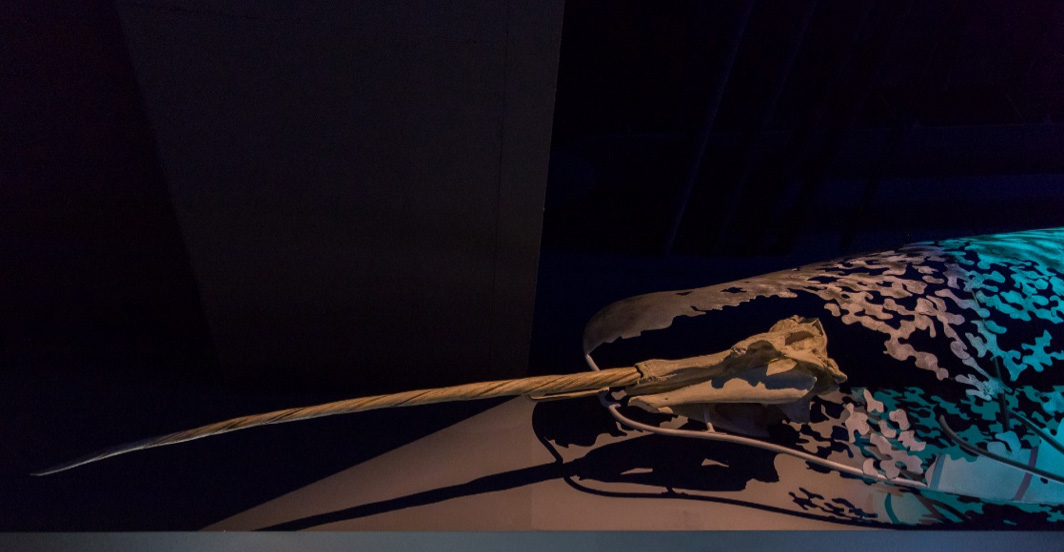 Their most distinctive feature, the tusk, is actually one of only two teeth that a narwhal has. The tusk is generally only found on males, but a female has been known to develop one. It can grow up to 10 feet in length! Contrary to human teeth, the tusk possesses nerve endings on the outside—10 million nerve endings to be exact.

The narwhal’s bizarre tusk has resulted in much debate over its function. Many believe that the tusk helps with mate selection, with larger tusked males being more desirable. The other leading theory is that it functions primarily as a sensory organ, able to detect changes in the surrounding environment, such as temperature and salinity. The ability to sense these variations may not be as strange as it sounds. Since narwhals inhabit cold waters, detecting freezing water makes them aware of areas they could become trapped by ice.

The narwhal skull on display at Ripley’s Aquarium of Canada is unique in that it has two tusks. It is estimated that only one in 500 male narwhals develop a second tusk.

Several combined factors, including hunting, aquatic pollution, and habitat destruction, have led to the narwhal’s status as ‘near-threatened’ with the IUCN (International Union for the Conservation of Nature). Climate change has resulted in additional strain on their population, both directly, due to the loss of sea ice, and indirectly, due to increased predation from orca whales spending more time further north than ever before.

Next time you visit us be sure to stop by the “Nar-wall” to learn more about these fin-tastic animals.