This May the 4th, movie fans from galaxies far, far away are invited to take part in an epic battle of good versus evil at Ripley’s Aquarium of Canada. Join the Rip-bellion during Sea Wars weekend to witness one of the most iconic pieces of film history – the original Star Wars Lightsaber used by Luke Skywalker™ in Star Wars: The Empire Strikes Back. 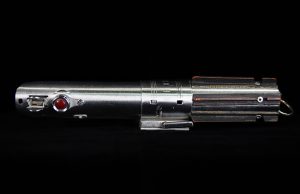 Constructed from a vintage 1930s Graflex camera flash gun, the lightsaber is from the archives of producer Gary Kurtz, and was acquired by Ripley Entertainment in 2017. To celebrate, the Aquarium will be hosting a variety of Sea Wars events starting with a 19+ Cosplay Bash on Friday, May 4th from 8pm-12am. The lightsaber will be on display during the event along with other artifacts from the collection such as an authentic Chewbacca® handprint, C-3PO® head, original script from Star Wars: Return of the Jedi, and Carrie Fisher’s director’s chair.

As part of Ripley’s popular aquarium after dark 19+ Splash! series, Cosplay Bash will also feature underwater lightsaber duel dive shows, food stations by Daniel et Daniel, music by DJ Fizza, themed areas, and specialty cocktails such as The Dark Side. Tickets to the event are$30+HST, excluding food and drinks. Annual pass holders will receive a 50% discount for up to four tickets.

The festivities continue throughout Sea Wars weekend with family-friendly activation such as daily lightsaber duel dive shows, building block lounge and Pokeball wall, photo opportunities with Star Wars memorabilia, and face painting at the Discovery Centre overlook (9am-4pm). Fans are encouraged to dress as their favorite Star Wars character on May 5th and 6th to receive a 20% discount on the price of general admission at the door.