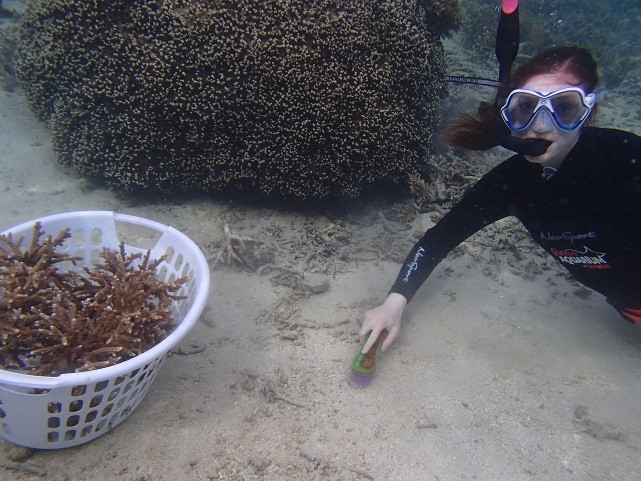 A Visit to Fiji’s Coral Coast

From the surface, everything you’ve heard is true… the white sandy beaches and the aqua blue water are stunning. But underwater, things are astronomically different than they were even just 20 years ago… 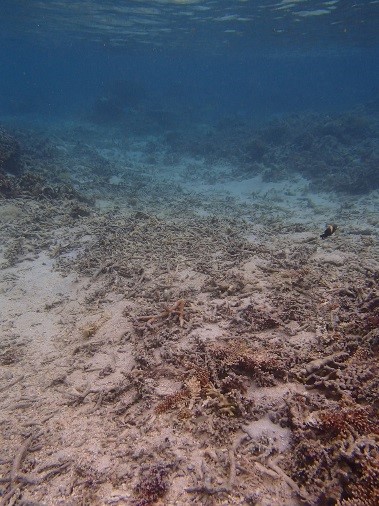 On my first day volunteering with Reef Explorer Fiji’s Director, Victor Bonito, and his team, I was filled with anticipation and excitement as we traveled to one of the local Marine Protected Areas in the district of Korolevu-i-wai. I couldn’t stop smiling as we unloaded our tools from the truck and could hardly wait to put on my snorkel gear and run into the water.

As my face plunged into the ocean I saw small coral colonies in the distance.

As we snorkeled further from shore, I was overwhelmed by the sheer size of the first coral colony I saw, and I smiled so wide that salt water started to flood my mask. Victor had warned me that 30-50% of the coral colonies along this coast were decimated in several mass bleaching events in the early 2000s, but the reef looked fine to me! As I swam past the first coral colony, I was so excited to see what was beyond… but instead of more coral bustling with life, what I saw was barren ocean floor, littered with coral rubble, and my heart fell. Since the climate change related mass bleaching events, some diverse coral communities have persisted in these Marine Protected Areas, but the vast expanse of “coral graveyards” that I saw, served as an ominous warning of the looming threat of future coral bleaching events.

In response to the current loss and future threats facing coral reefs along this coast, Victor Bonito and his team at Reef Explorer Fiji monitor the reefs in this district and have developed a coral restoration program with the goal of restoring the reefs.

They have identified heat resistant corals during previous bleaching events and hope to expedite the reef’s natural recovery by growing fragments of these heat resistant corals in “nurseries”. When they grow bigger, the coral fragments will be out planted to the reef where they will hopefully grow and reproduce with each other giving rise to more heat tolerant corals that have a better chance of survival during future bleaching events… and this is where volunteers, like myself, can help their effort.

As we continued snorkeling, we finally reached the first “coral nursery”. If I didn’t have a snorkel in my mouth, my mouth would’ve fell open; tiny corals of every shape and color were hanging from ropes, strung on a metal frame and already, these corals were home to tiny fish and invertebrates. I felt increasingly hopeful when Victor told me he had 6 coral nurseries consisting of over 50 species of coral in several Marine Protected Areas… I was excited to find out exactly how I could contribute to this coral restoration process! 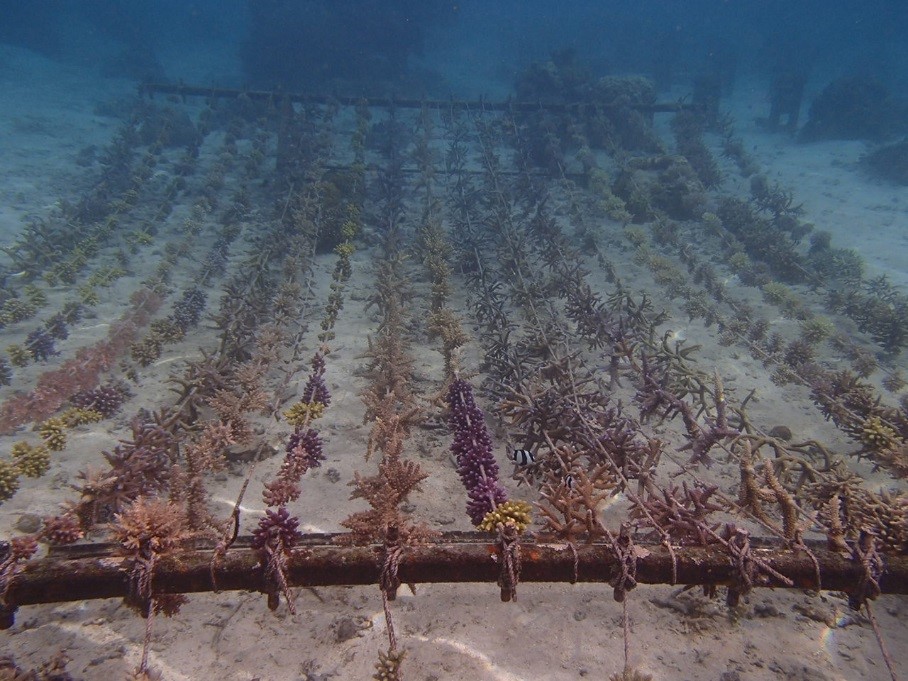 We started our work by cutting corals from the ropes and dropping them into a laundry basket to be transported to the sites where we would transplant them.

Victor knew the reef like his own backyard and used his scientific expertise to choose restoration sites which would be ecologically receptive to these tiny corals. Once the restoration site was selected, Victor told us to brush the sediment from areas of hard rocky bottom on the ocean floor to prepare the attachment site. We then mixed batches of sand, plaster and cement and placed small balls of the mixture on the brushed areas.  As I took the first coral fragment in my hand and used special care to push it gently into the cement mixture, I felt an overwhelming sense of accomplishment, as one by one, I was helping to repopulate the coral reef. After one day of hard work by our team of four, the once barren patch of ocean floor was teaming with upwards of 200 corals! And by the end of 5 days, our team out planted over ONE THOUSAND corals! 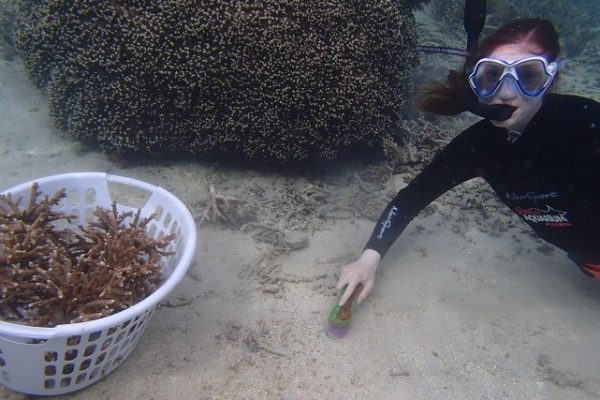 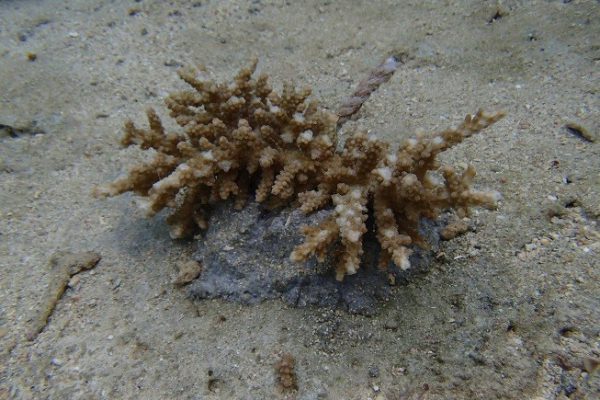 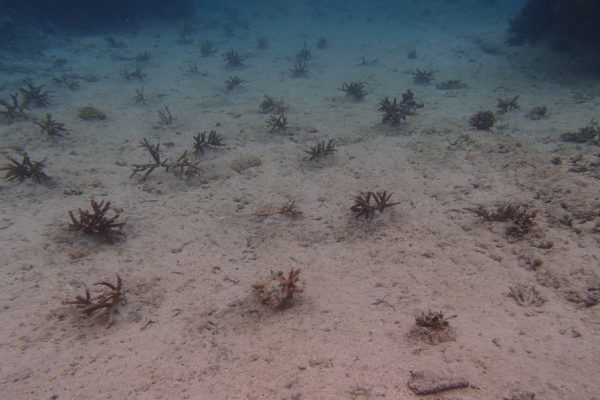 After 5 days of cutting corals from ropes in the nurseries and out planting them to the reef, it was time to re-stock the nurseries.

During previous bleaching events, Victor had identified heat resistant coral colonies based on their response and survivorship. It was these heat resistant colonies of varying species that he cut tiny fragments from to use for re-stocking the nursery. After fresh rope was tied to the metal frame, myself and my peers took the tiny fragments, which were no larger than my finger, untwisted the new rope and tucked the coral pieces inside. These tiny coral fragments will grow on the ropes for 6-10 months depending on the species and their rate of growth, until they are large enough to be out-planted to the reef. As we finished our work and I swam away from the nursery for the last time, I was filled with an overwhelming sense of gratitude to have been involved in this project and to have directly contributed to coral reef conservation. 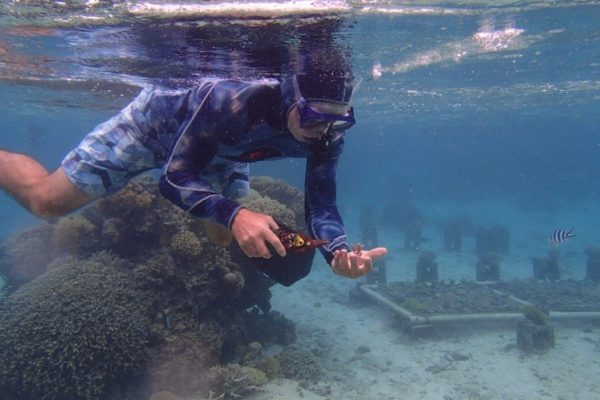 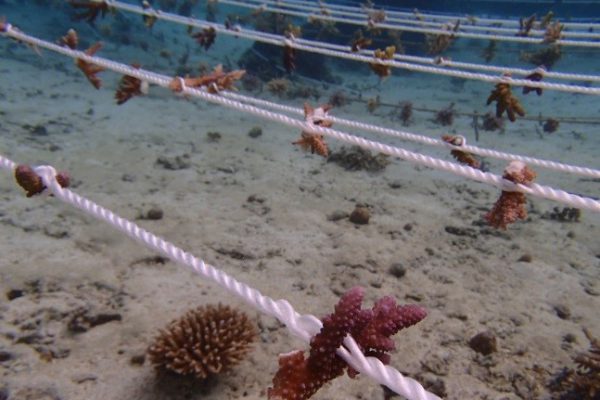 I am very thankful that Ripley’s Aquarium of Canada sponsored me for the Reef Explorer Fiji volunteer program.

While I was in Fiji, I fell in love with the Pacific Ocean and the people who live there.  I was incredibly inspired by Victor and his small local team, who continue to do their best to restore the reef, one coral piece at a time. As I acclimatize back to life in Canada, I want to do everything I can to play my part in saving the reefs by changing the tide on global climate change, and I encourage you to do the same. Here’s a list of things you can do to reduce your carbon footprint and help to save the coral reefs:

“Never doubt that a small group of thoughtful,

committed citizens can change the world;

indeed it’s the only thing that ever has”