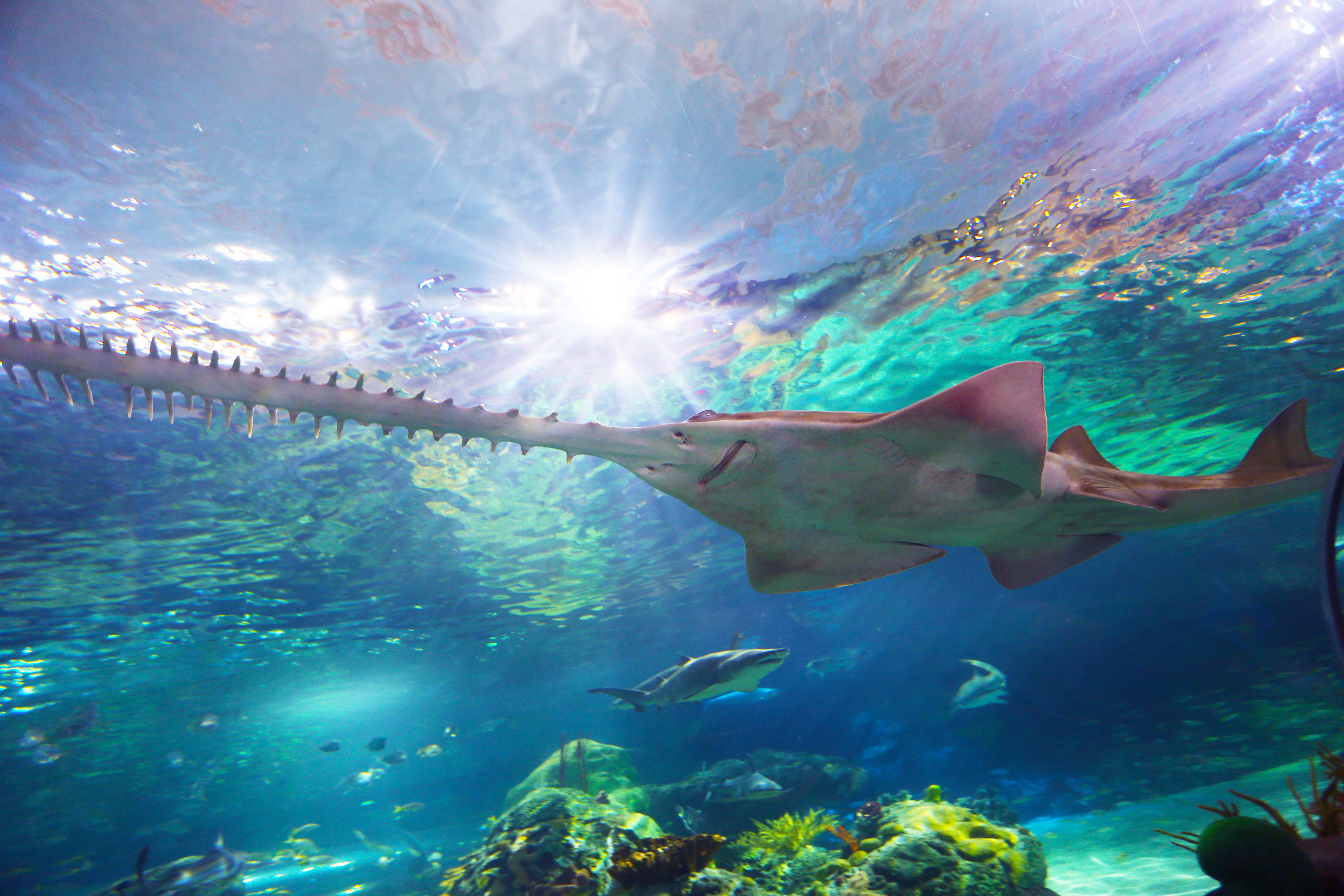 There are only five species of sawfish in the world – Dwarf, Knifetooth, Smalltooth, Largetooth and Green sawfish. The largest being the smalltooth sawfish, which can grow up to 25 feet!

Sawfish are considered the most threatened group of Elasmobranchs (sharks and rays) in the world. Here at Ripley’s Aquarium of Canada, we have two resident green sawfish, who live in the Dangerous Lagoon exhibit.

Green sawfish are more closely related to stingrays than sharks. They are a modified ray with a shark-like body, and can grow over 15 feet in length! Commonly mistaken for swordfish, sawfish are elasmobranchs meaning their skeleton is made of cartilage (like our ears and nose), and not bone. Our female green sawfish is easily our largest animal at the Aquarium, weighing in at over 400 pounds over 14 feet long from end to end! (Don’t know which one is female, and which one is male? When viewing the sawfish from within the Dangerous Lagoon tunnel, look for the presence of claspers. These male reproductive organs are modifications of the pelvic fins and are located on the inner margin of the pelvic fins.) 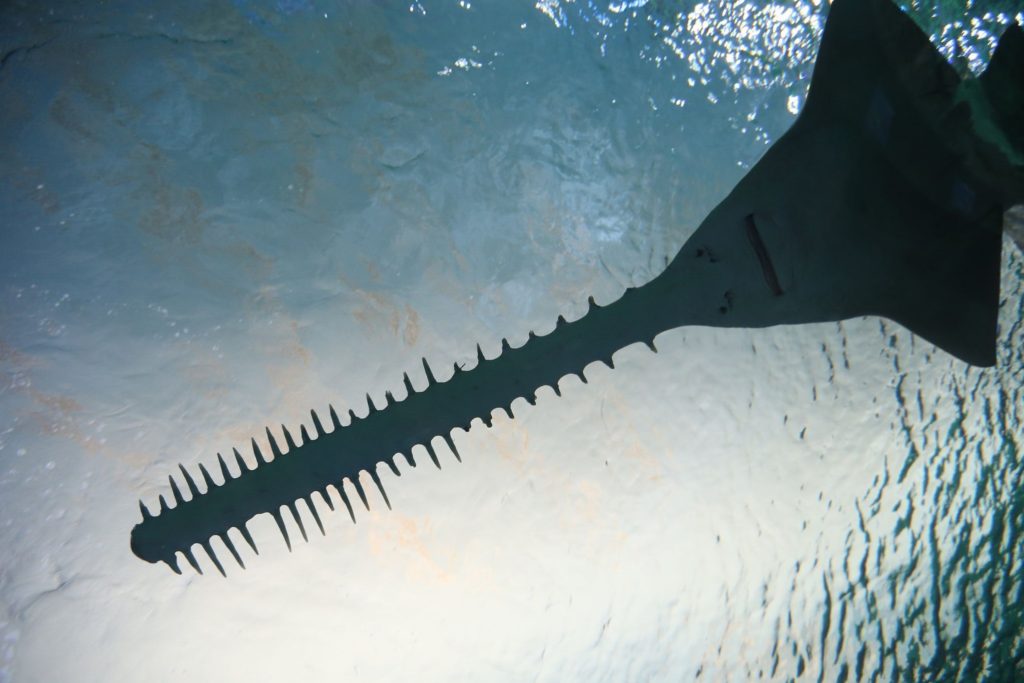 The rostrum, or “saw,” is what makes these animals so unique!

A sawfish’s rostrum is long and narrow, edged with teeth and can comprise up to 30% of their length! Depending on the species, the rostum is comprised on 16-37 pairs of teeth on either side. Once lost, these teeth will never grow back.Contrary to popular belief, the saw is not used to saw into other animals. An efficient weapon covered in electroreceptors, called ampullae of Lorenzini, the rostrum allows sawfish to detect their prey in the substrate, before taking lateral swipes to stun or kill.

With all five species listed as endangered or critically endangered by the IUCN, the first annual International Sawfish Day couldn’t have come at a better time!

Sawfish are a vulnerable species due to their unique morphology and slow growth. Their rostrum often causes entanglement in fishing nets and other marine debris and can often lead to targeted trophy hunting. They are also continuously hunted for their meat, liver oil and fins for the shark fin trade. And, as a species commonly found in shallow coastal waters, their habitat is at risk due to development. 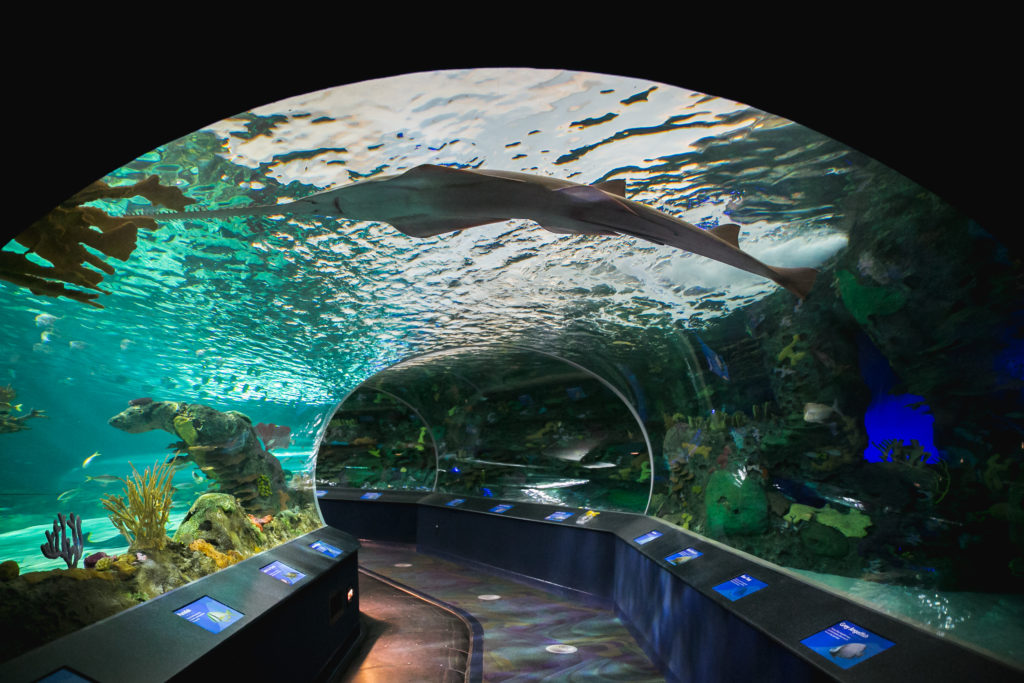 But, you can help!

One way to do so is by joining Ripley’s Aquarium of Canada on Facebook! On October 17, we will be celebrating International Sawfish Day with TWO Facebook LIVE events – 8:45am & 1:00pm (topics listed below).

8:45am – “All About Sawfish” Facebook LIVE with our Senior Aquarist Kat!

We hope to ‘sea’ you there!

Is there something that you’ve always wanted to know about sawfish? Leave your sawfish questions below (before Monday, October 16) for your chance to WIN a sawfish stuffed animal, two general admission tickets and a keychain, AND have them answered during our Facebook LIVE on International Sawfish Day!