As you may have heard, Ripley’s Aquarium of Canada’s newest residents are a whole herd of baby lined seahorses. But wait, there’s more! You may also have heard that they hatched on New Year’s Day – our very own new year’s babies! They arrived on January 1, 2019 with much fanfare; in fact, their arrival was covered by media across the country.

We’re very excited about our new fry (baby fish), so we thought we’d take this opportunity to teach you a bit more about them.

First things first: they were the size of grains of rice when they were first born, not jellybeans.

But that doesn’t mean that they were any less cute!

The lined seahorse (a.k.a. the northern seahorse, a.k.a. the spotted seahorse) is found in the Atlantic Ocean, as far north as Canada and as far south as the Caribbean, Mexico and even South America. It swims in an upright position (thus its scientific name – Hippocampus erectus), using its dorsal and pectoral fins to guide it through the water. Seahorses have an armoured body made up of bony plates and prehensile (capable of holding) tails, which they use to grasp onto sturdy structures such as seagrass or coral. Due to their weak swimming abilities they spend much of their time anchored like this, sucking in small prey through their tubular snouts. 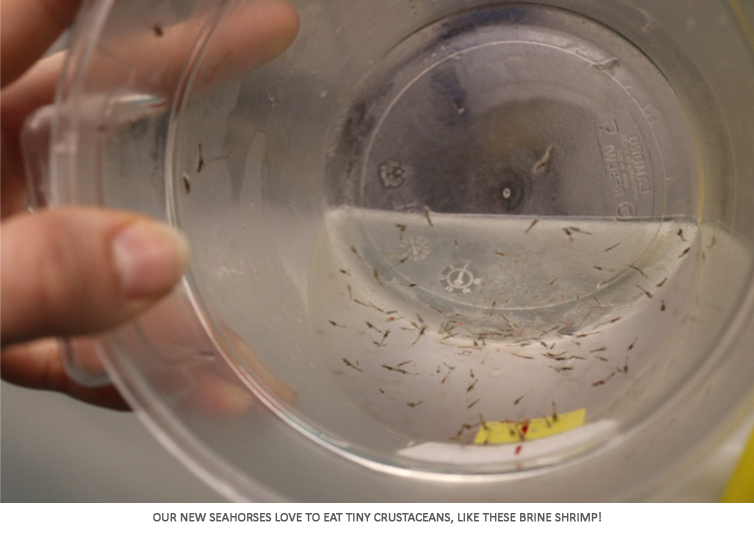 Due to their unique digestive system – they lack a true stomach for the gradual digestion of food – seahorses may feed continuously for up to 10 hours a day!

Here at the aquarium our shoal of seahorses is fed at least three times daily, and our new babies, up to six times a day! That’s a lot of work for our aquarists!

Lined seahorses eat plankton and small crustaceans such as brine shrimp. Their eyes are able to move independently of one another (like a chameleon’s), all the better to survey their surroundings and ambush unsuspecting prey. While they are found in a wide variety of colours (from black, grey and brown to green, orange, red and yellow), they also have colour-changing skin cells called chromatophores (like an octopus) that allow them to blend in with their environment.

The lined seahorse is monogamous through the mating season; a bonded male and female will perform a special ritual dance every morning to reestablish their connection. They revolve around one another, change colours in unison, and sometimes even grasp tails.

As you may know, seahorses are unique in the animal kingdom in that the male is the primary caregiver of young. The female seahorse passes her eggs into the male’s brood pouch – a pouch where the eggs are protected before hatching – where they are incubated for about three weeks. Upon hatch, they are only the size of a grain of rice! Regardless of size, the male releases them into the water column and from that moment on they must fend for themselves.

The number produced from the male is anywhere from 97 to over 1,500 offspring!

You might ask why so many baby seahorses are spawned at a time, when only a fraction of them will survive to adulthood. Think of it as quantity versus quality. Essentially, organisms living in inhospitable environments with limited resources and lots of predators (like the ocean) reproduce quickly and in large numbers to ensure that at least some of their offspring survive to their own age of reproduction. This is the same strategy employed by sea turtles and horseshoe crabs – both species lay thousands of eggs, but few survive. 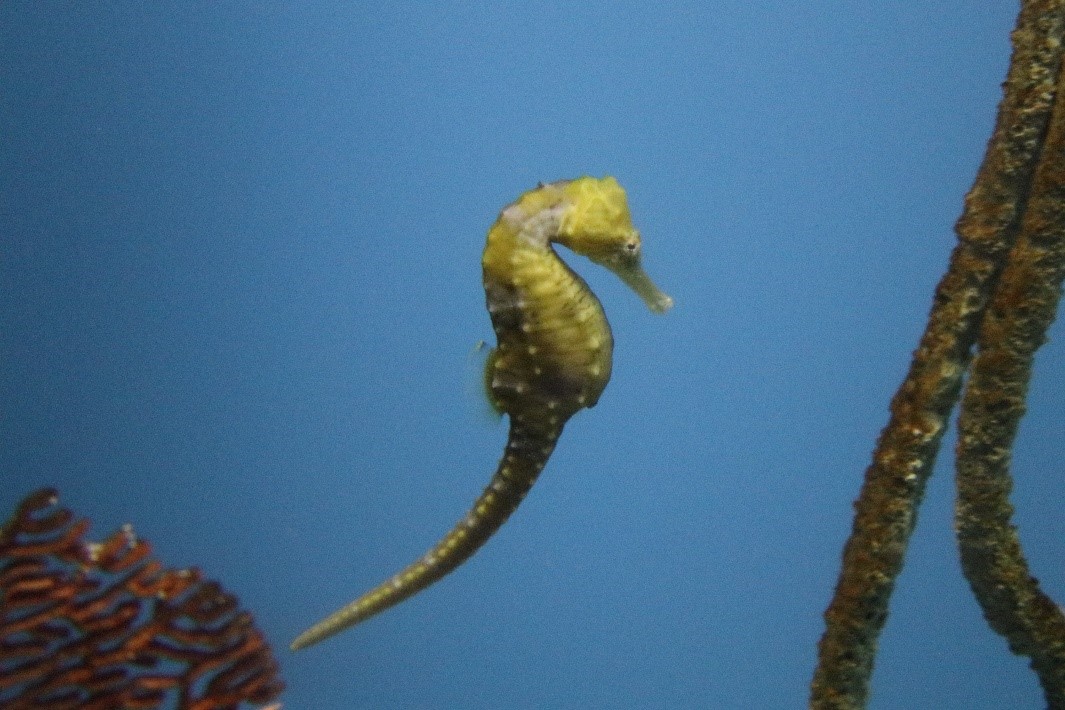 Luckily, here at the aquarium, the new year’s babies have been separated from the rest of the shoal, and have a better-than-average chance of surviving this vulnerable period.

Lined seahorses have a lifespan of 1-to-4 years; here at the aquarium, they live 3-4 years, the maximum reported for their species.

Now that you know all there is to know about the lined seahorse, giddy-up and get yourself to the aquarium to see our New Year’s babies, now on display in The Gallery!