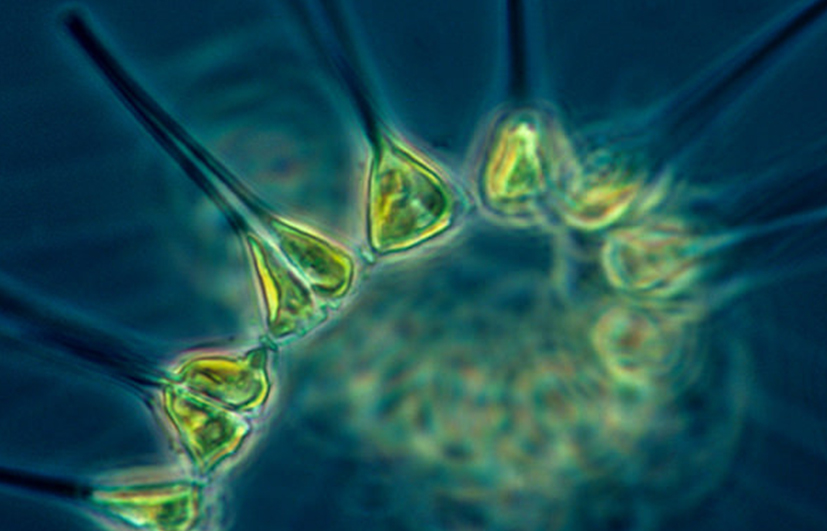 What do you think of when you think of St. Patrick’s Day? The rolling green hills of Ireland? Green shamrocks and leprechauns? Green food colouring in otherwise perfectly-good beer? Whatever images you associate with March 17, the cultural and religious holiday celebrating Irish heritage, it’s likely that they’re awash in green!

And when it comes to the colour green, the ocean might not be the first thing that pops into your head. After all, when we look down at our planet from above, it’s our terrestrial spaces that appear green—the oceans have always been, and will always be, blue. …or will they?

The planet is warming—the effects of climate change can be seen all across our oceans, from the phenomenon known as coral bleaching, all the way down to changes in the growth and abundance of phytoplankton (microscopic photosynthesizing algae). These changes are happening at an unprecedented rate due to decidedly human factors such as industrial carbon emissions.

There are two main classes of phytoplankton, dinoflagellates – which have a whip-like tail (flagella), and diatoms – which do not.

While you are more than likely aware of the harmful effects that climate change is having on our planet, a new study has shown a surprising side-effect that you might not have considered… The planet is about to get a whole lot greener—and not in the environmentally-sustainable way you might have been hoping for.

Researchers from the Massachusetts Institute of Technology, NASA and the US Department of Energy published a paper last month summarizing their findings using a global model that simulates the growth patterns of different species of phytoplankton, and how those phytoplankton absorb and reflect light. This model could serve as an early warning signal for ocean health–or ill health.

In short, the researchers found that more than 50% of ocean waters will experience a change in colour by the year 2100!

Regions appearing blue (such as the subtropics) in satellite photographs will become bluer due to a loss of life in general, and phytoplankton in particular, compared to those regions today. However, water that currently has a greenish tinge, such as that near the Earth’s poles, will become even greener, due to warmer water temperatures creating blooms of more diverse species of phytoplankton in those regions.

So what creates the ocean’s colour to begin with, and how does algae affect it?

It has to do with how sunlight interacts with what’s in the water itself. As you may know, light is comprised of all the colours of the rainbow. Water molecules absorb almost all light frequencies except for the colour blue, which is reflected back to us, which is why the open ocean appears as a deep blue in photographs taken from space. But ocean water that contains a lot of phytoplankton will appear greener, as the chlorophyll (the green pigment that helps plants and algae photosynthesize the sun’s energy into food) in phytoplankton absorbs almost all of sunlight’s blue spectrum, and reflects back more green light. 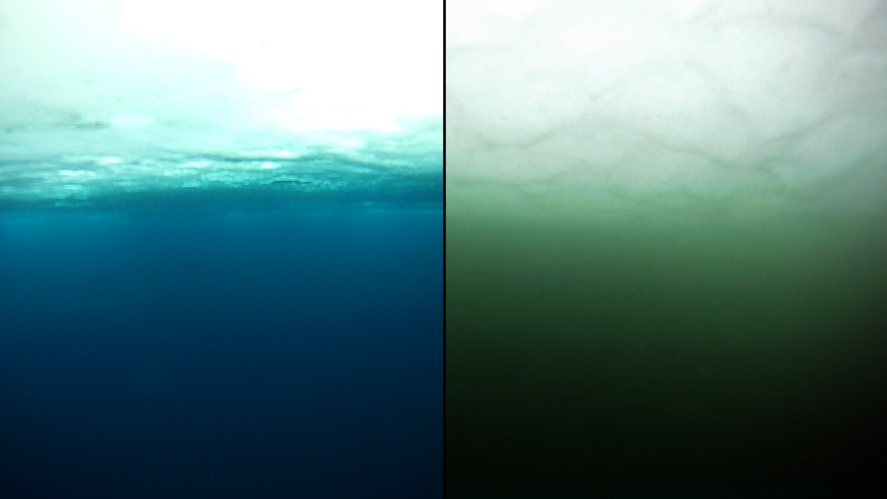 This side-by-side comparison from NASA illustrates typical Arctic waters (left) and the same waters during a massive algal bloom (right).

What does this all mean, apart from the fact that our planet could soon be looking a lot greener?

Plankton of all kinds—and phytoplankton in particular—are at the bottom of a huge number of ocean food chains. So if climate change shifts the growth of phytoplankton—whether from one species to another, or from one part of the ocean to another—this will change the types of food webs that they can support, and that will impact on species further up the food chain. Entire ocean ecosystems will be affected.

Not to mention that phytoplankton produce about 50% of the oxygen we breathe… Needless to say, changes to their distribution across the ocean means a whole lot more for the planet’s health than just its colour.

But don’t despair. When it comes to climate change, we have more power than you might think. Stay ‘tuna’ed to the Deep Sea Diary for an upcoming post about what you can do to reduce your carbon footprint, and join the fight against climate change.

For now, sláinte, Happy St. Patrick’s Day, and may all your rainbows end in a pot of gold(fish)!