While You Were Away, Sand Tiger Shark Mating Got Underway!

Welcome to the Deep Sea Diary: Underwater Love Edition! Today’s topic is why the sharks in our Dangerous Lagoon have been acting so strange. If you have been viewing our underwater Shark Cam, you may have noticed that our sand tiger sharks (the largest in the tank) have been looking and acting a little different. That’s because we have entered the ever-exciting shark mating season here at the Aquarium! Let’s dive into the who, what, when, where, and how of sand tiger shark mating. 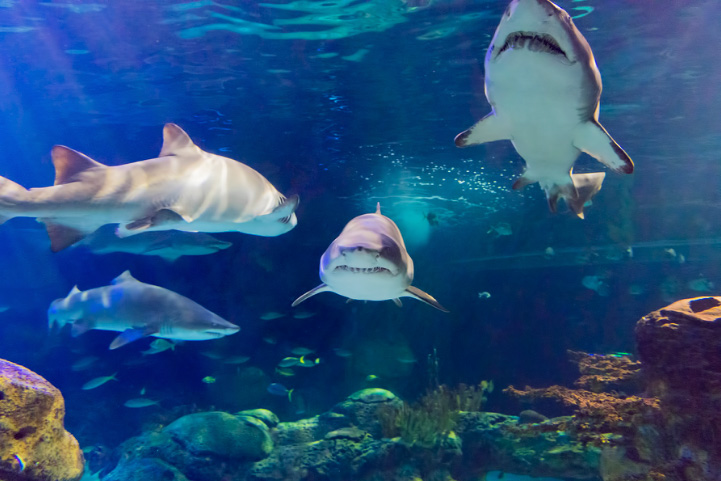 Mating behaviour of Ripley’s sand tiger sharks generally begins in the late spring. Our male sand tiger sharks will consume a lot of food prior to mating season, and then immediately lose their appetite for a  period of fasting—sometimes even spitting food back out at us! They then put the pedal to the metal by swimming much faster and closer to the surface of the water as they “patrol” for females. You can expect to see some aggression with other tank inhabitants and among male sand tiger sharks, but typically they will not actually eat the other creatures living in the tank (our other fish can breathe a sigh of relief). The result is one shark becoming the dominant “alpha” male. In contrast to the males, female sand tiger sharks slooooow their swimming speed and prefer to stay in the darker cave area or closer to the exhibit bottom. Patrolling males will protect the area females occupy and eventually the alpha male will force all beta males out by snapping at them. Typically, sand tiger males will not actually bite each other as snapping is enough to force beta males away. 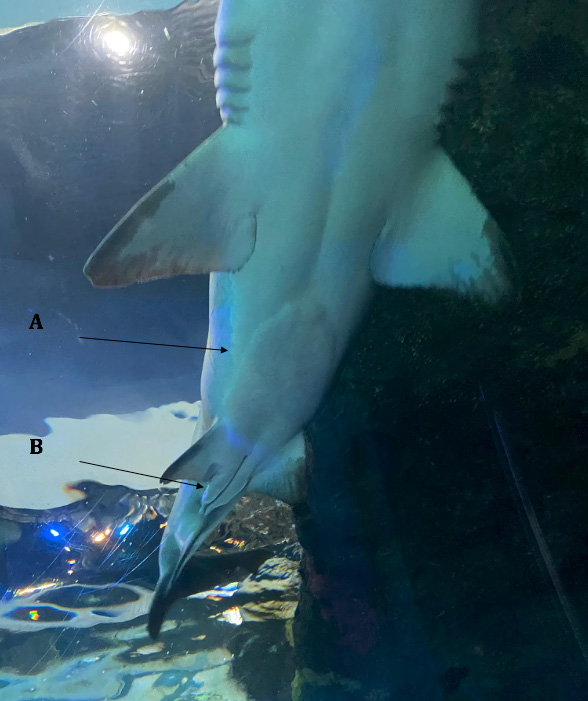 Here you can see the siphon sacs (A) of one of our male sand tiger sharks. These sacs swell with sea water during mating season and aid in propelling sperm through the claspers (B) during copulation.

During copulation, the male shark will bite the female around the fins and side of her body in an effort to slow her movement long enough for his claspers (the male reproductive organs) to transfer sperm. Females will put up some fight but the energetic cost of fighting is too much, so she often concedes, leaving her with superficial wounds on her pectoral fins and belly. Over the course of the mating season a female sand tiger shark will usually copulate with many partners. Females have two oviducts and release three to five eggs per oviduct. In theory, each egg could be fertilized by a different male.

Here’s where it gets weird! Gestation takes eight to nine months and those eggs will begin to hatch inside the female. But rather than exiting the womb immediately, the first shark to hatch will eat the other developing eggs! This is called intrauterine cannibalism. Thus, mature females will actually only birth two pups per cycle (if they’re lucky), which is every other year, resulting in them having one of the lowest reproductive rates of all shark species. 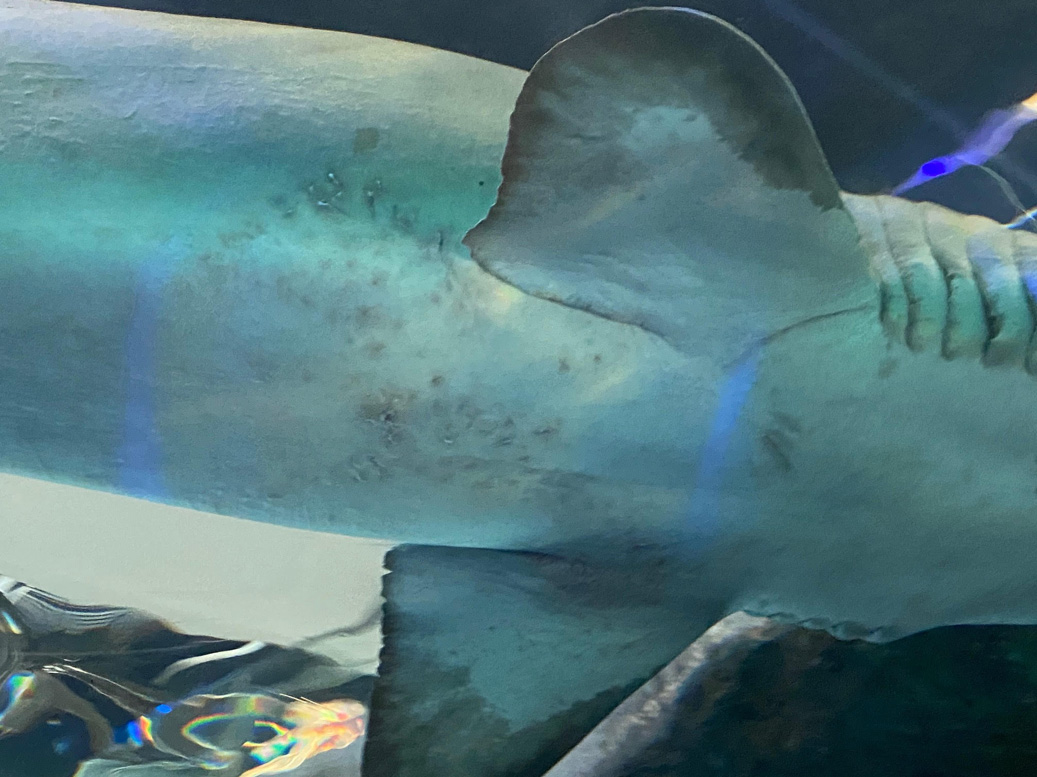 Above you can see some recent (and older) bite marks on one of our female sand tiger sharks. The skin of a female shark can be up to 3x thicker than males to accommodate the “love bites.”

Sand tiger shark mating behaviour and reproduction remained enigmatic until recently, with very few aquariums having reproductive success. To help shed light on this topic we have teamed up with SEZARC (South-East Zoo Alliance for Reproduction and Conservation) to monitor our sand tiger shark mating behaviour, contributing our findings to their database and research. The end goal is to successfully maintain sand tiger shark populations in human care while boosting numbers in the wild through artificial insemination. Although we have had many successful mating events in the past few years (a great sign that our sharks are happy and healthy), we have not yet had a successful pregnancy. Maybe 2020 will be the year!

Swim over to our Shark Cam and see if you can identify our alpha!